Summer with Mya and King

I took this photo last summer but it was edited and sent to me by a friend, Bong Rollan.  (Thanks, Bong!)  This is one of my all-time favorite photos of these two- none of them having gone overweight! 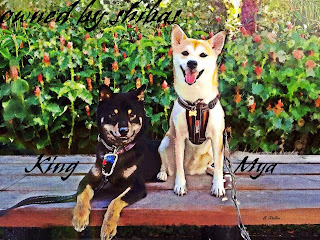 Looking forward to more early morning walks with the 2 of my feisty furpups! Hope I can wake up before the sun gets too intense for our walks.

Oh and the the drastic change and non-existence of blog updates can be attributed to my hands being full with them up there in the photo- smiling like they know what I got myself into!

I have been asked many times what it is that I love about this breed.  This Nihon ken is usually not affectionate in the usual ways and has a very independent nature which means she keeps you at an arm's length.

They like to be around you but not touching you, and definitely not on your lap... unless you're at the vet. Mya is not an exception.  Though I dream of her excelling in agility since she is a very spirited, agile and nimble trackster, we flunked out because she would rather go on her own terms. She will gladly take treats from my hands but not before sniffing every piece to make sure I know I still have to earn her trust.  She is proud, she is dignified and expects to be served.  A fellow shiba inu lover puts it aptly:

"Ever meet that hot guy our girl that's so beautiful you think they are out of your league? they always treat you like they can live without you and hardly ever give you the time of day. However there are those brief moments where they look at you with those eyes, cuddle with you for a minute or two that makes being "together" in this seemingly one-sided relationship worth it? And afterwards you go back to followimg them around like a lovesick puppy-dog picking up after their shit and putting up with their antics?

Thanks, Jesse, for putting words into my thoughts!
Posted by Crazy-Nunu at 10:12 PM No comments: 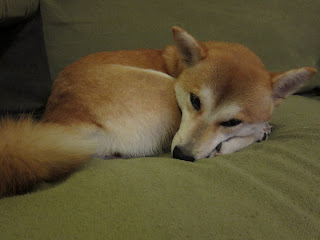 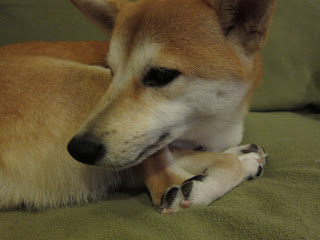 Posted by Crazy-Nunu at 1:22 PM No comments: 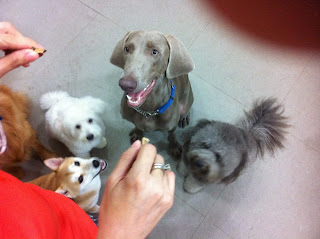 Posted by Crazy-Nunu at 9:04 AM No comments:

Just a few convincing photos showing the value of patience and persistence in socializing dogs and teaching them how to "share".  Mya used to get snarky when she is with other dogs and suddenly, yummy treats come into the picture.
Here she is, practising self-control during a session of desensitization- desensitizing her to the presence of other dogs during treat-giving. Just look at the intensity of her stare. Ears focused and all.
Acknowledgements:  Pup Culture﻿
Posted by Crazy-Nunu at 9:23 PM No comments:

Email ThisBlogThis!Share to TwitterShare to FacebookShare to Pinterest
Labels: Training

Abnormal Eyes
Call me paranoid, but upon coming across shibas in the forum who have lost sight due to cataract and glaucoma, I suddenly felt so alarmed when Mya's right eye started having abnormal discharge.  I never had to clean up the eyes of this self-cleaning dog, and yet I found myself having to wipe her eyes 3 times a day.

Brave Nunu
Noticed it on a Wednesday and thought I'd give it a day for her immune system to take care of it but since the next day it was worse, and some advice from the shiba peeps made me realize it could be crucial, she was brought to the BSF on Thursday.  Findings:  a speck on the outside, most likely dirt, a crystal-like formation inside, massing of veins in the cornea.  Did some flushing with saline solution and Mya was such a brave and nice girl! She sat still and allowed us to squirt stuff in her eyes, and allowed Dr. Farah to examine her eyes so closely that they were literally nose to nose.

Eye Infection/ Irritation
Next day, brought her to VIP upon hearing that they have a tonometer, an instrument that is used to measure pressure in the eyes.  Unfortunately, when we got there, we were told the machine is out of commission and has been sent out for repair. So it ended up as another check-up.  Dr. Marga examined her eyes and did not see any opacity to suggest cataracts, but saw the eye discharge which alarmed her because it's greenish. Had to give antibiotic eyedrops for a week.

20/20
A week after, we were able to have her eyes examined by an opthalmologist who looked at her eyes closely with human grade hi-tech opthalmic gadgets that allowed her to examine up to the optic nerve. Findings: normal!  Then she went on to examine her eye pressure by palpation. Result: Normal!

Thank you, God, for the good news. Will still be on-guard against these just to be sure...

Some things you want to be alert about:
1.  Eye Discharge
2.  Eye Pain - manifested by sleeping more
3.  Photosensitivity
4.  Eye feels hard by palpation
5.  Cloudiness

Any of these signs need to be checked out as glaucoma can happen overnight.  Though there is no cure, there are ways to delay the progress.  Cataracts can be delayed as well, though there is such a thing as cornea or lens replacement which costs an arm and a leg.

To all shiba inu owners, the books don't mention glaucoma as one of the breed's hereditary problems, and eye exams done to qualify sires and dams for breeding do not screen out for glaucoma, but watch out because it does happen. So far, the ones affected that I know of are in the U.S. but it is said that it is "rampant" in Japan. (according to a Japanese contact from shibasightline forum)  Please correct this if it isn't so.

Best Resource and Support Group:  shibasighline@yahoogroups.com
Posted by Crazy-Nunu at 1:35 AM No comments: