Depriving Us of Sleep

Half-awake and half asleep, I hear Mya's footsteps in surround sound.  One moment they're coming from beside me, the next moment over from the other side of the room. In between, she would pause to do her shiba shake which is also effective in waking me up.  She is pacing back and forth, and then I feel her presence beside me.  With her paws up on the bed, she is staring at me and when I stir she gives me a huff.  It's still dark and I look at the clock- 3 a.m. What does she want at three in the morning?  Did she want to go potty? She has her doggie door so she can easily go out without waking me up. I try to go back to sleep but she decides that it's my husband's turn to be rudely awakened.  Just as I am starting to fall asleep again, dear husband wakes me up to tell me that the dog woke him up. This has been happening every day for a little over a week now.

Mya..Mya...Mya... you have started a cycle of sleep deprivation.  For the life of me, I can not think of any reason why she started doing this, apart from our new early morning walk-walk schedule, which is no earlier than 5:30 a.m. Maybe I have to teach her how to read time.

Mya, we're going back to our old schedule. We will stick with early evening walks.  Meanwhile... I need to catch up on sleep. 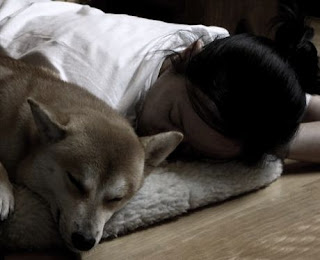 It seems like since Mya became a part of our lives, I have been infected with a virus that makes me whip my wallet out everytime I see dog toys.  I'm  slowly recuperating from this disease but as you can see here, the ill-effects are irreversible. 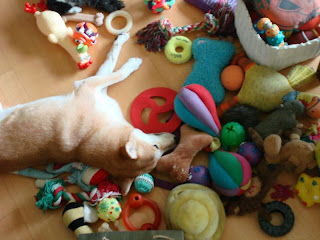 As a puppy, Nylabones were great!  So were anything else that could withstand heavy chewing, are not toxic, and are not digestive blockages waiting to happen.  From adolescence, Mya specially loved squeaky stuffed toys and her favorite throw pillow that she would pounce on and dig into. She became more trustworthy with toys that she could manage to shred as she has learned to spit out the shreds and little pieces that she manages to tear away from her toys- toilet paper cardboard rolls, empty mineral water and Gatorade bottles, and other stuffed toys. As an adult dog, she still loves all of the above, and also plays with interactive toys, as she enjoys the mental stimulation from these.

One regret that I have (though it isn't too late) is not having played tug with Mya as she was growing up.  I read more than once in dog behavioral books that playing tug, which is a game of strength, increases the aggression in dogs and should be avoided.  ("Child-proofing Your Dog", Brian and Sarah Kilcommons, (C) 1994) Though tug was Mya's favorite game, I banned playing tug with her as we were preparing her for the arrival of our precious baby boy. We simply didn't want to encourage overly playful, aggressive behavior that time.   About a year later, I learned from Jojo Isorena, Dog Behaviorist and owner of BetterDog Canine Behavior Center, that there is actually a proper way of playing tug that does not lead to aggression problems.  He demonstrated it with Mya and it indeed looked so much fun!  I should have known better than to believe the overly-simplification of the dog training books that I read.  I wish I knew this when Mya was still a puppy. Nonetheless, I will be practicing this with her from now on.


Proper Way to Tug
Start with a proper tug toy.
1.  A good tug toy is made of fabric that can withstand your canine's teeth and the heavy pressure of tugging.  It should be soft enough to be comfortable in his mouth.  Avoid stiff as well as rough fabrics that could cause abrasion and sores inside his mouth.
2.  Mind the size of the tug toy.  Make sure that it fits comfortably in your dog's mouth- not too big, not too small.  Mya rejected my past 2 attempts at a home-made tug toy as they turned out a bit too large for her shiba (small) mouth to grip.  Instead of going for the tug, she would go for the rope handle, which was, on the other hand, very narrow.  I discouraged continuing the game with her just gripping the rope between her teeth because the prospect of having to treat a dog with rope-burn in her mouth did not appeal to me at all.
3.  Use a tug with a handle. This is for your own safety.  Sometimes, in the middle of intense tugging, your dog would have to adjust his grip.  You wouldn't want your fingers to accidentally get caught in between the tug toy and his teeth.  That would be ugly.

The Game
Catch his attention with the tug toy.  Using the handle, hold it in front of him and swing it around, back and forth until he gets the urge to grab it with his teeth and pull it.  Your tug game has officially commenced.  Make sure you don't lose, as you need to keep your place in the heirarchy.  He needs to know you are stronger than him.  But once in a while, give him slack so he can also enjoy the game. Now this is the most important part.  Throughout the game, you should have intermissions, when you command him to let go.  A simple "drop it" command will do.  When he obeys and lets go (acknowledging your leadership), you start the game all over again.(reward)

End the game by taking the tug toy and keeping it. (sealing your leadership role)

With a highly playful dog like Mya, almost nothing else comes close to a game of tug in terms of bonding- unless giving her a bath in a very cramped shower enclosure counts! ;)
Posted by Crazy-Nunu at 4:39 PM No comments:

Email ThisBlogThis!Share to TwitterShare to FacebookShare to Pinterest
Labels: Toys and Play, Training

Mya has been my constant companion and since I work from home, I would have to ignore her for long stretches.  That isn't good when you want your dog to see you as the most interesting thing in the world.  Apparently, this is the key to getting a shiba inu's attention when doing agility off-leash.  Haven't had the success in this area yet.  She aces the obstacles, but with zero focus on me, we won't get anywhere.

I have trained her to expect something fun whenever I say the magic words "It's playtime"!  Hopefully it will work when she's off-leash.  It usually gets her attention, but making her obey is another story.  She knows all the commands very well, but being a shiba inu that she is, when I give a command, I can almost see her thought-balloon that reads "Why should I?"

This morning's Playtime was a search game- DIY-style.  She used to have these rubber balls that she eventually split in the middle, creating half-spheres.  I would hide a treat one at a time, and she would guess which half-sphere contains a treat. To get the treat, she would have to pick up the half-sphere and overturn it, as no amount of simple nosing or pushing would reveal the treat. 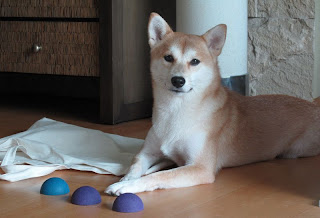 Mya and Her Half-Spheres
(They used to be balls.) 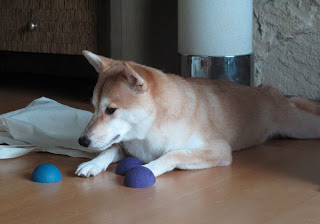 Email ThisBlogThis!Share to TwitterShare to FacebookShare to Pinterest
Labels: Toys and Play, Training

Early Walk and the Shiba Nunu

I love how early morning walks give her an all-day-long bounce. She trots around the house instead of walking like a zombie.  But this morning, I had to interrupt her morning trot with a dose of Iterax to stop her from itching.  Now she has claimed the sofa for some zombie Zzz's.

Talking about zzz's and interruptions, it's the second day she has interrupted my sleep to try and make me remove her "Lifesavers" collar.  This ProCollar is a genius invention, and much better than the plastic Elizabethan collars that are more aptly called the Cone of Shame. Got the ProCollar from Petco last time I was in New York, April of this year. I have never seen any of this kind here in Manila.  Wish someone would import it, or even better, manufacture it locally. My only comment is that it could use a bit of weight reduction. I guess making it durable enough for its purpose imposes a little bit on the weight. 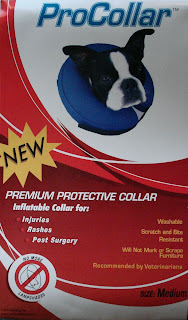 Nonetheless, she hates both- cone or doughnut.  I do too!  When she's wearing either, she can't fit through her doggie-door which means I have to open and close the door for her.  Wake up, lazy-bones! 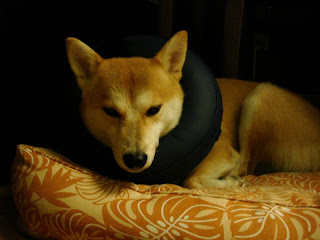 Mya and I tried to beat the afternoon rain.  Tried.  Fortunately, our friendly neighbors from Pup Culture were kind enough to lend us umbrellas and even kind enough to carry Mya home for me.

I knew she badly needed to walk because it has been raining every day and we haven't been able to go out in two days.  And she needs to burn calories now that she has weighed in at 12kg- her all-time high! Cheers to the Raw Diet! 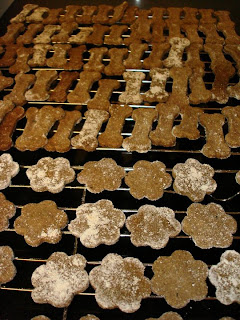 Fresh Inside Mya's Doggie Bag
Liver Parsley Home-Made Treats
(High Calcium, High Fiber, No Wheat)
Baked these for Mya a week ago when I decided to get rid of all her store-bought treats.  This way, I know exactly what she's ingesting.  Sort of.  Not including the bugs she catches near the window every morning. 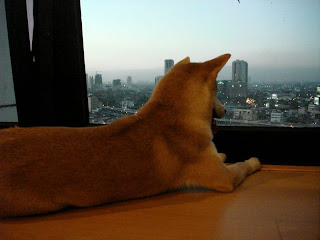 Mya at Dawn-Watch
Posted by Crazy-Nunu at 5:09 PM No comments:

Have a Mya Christmas!

Now in the news... a friend who is in the business of producing and selling personalized greeting cards asked me if she could use Mya's picture in her designs.  Of course, I said yes!  And I ordered too! 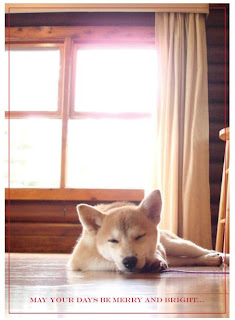