After a year in the making, Mya finally gets to meet her first shiba inu pal, Samu.  He is also a red shiba inu and is a year older than Mya. Here are a few photos of the 2 shibas interacting.
After a being rejected a few times, shibanunu keeps a watchful eye for any sign of play opening from Samu.  And in turn, Samu keeps a watchful eye for any sign of an impending "play-attack" from the nagging Mya.﻿
It was a fun and tiring day for both shiba inus.  Mya got to practice adjusting her very rough play style to her playmate's preference and Samu got to see that chaos can be fun too.

The shiba inu paw-rents took so long in planning Mya and Samu's "playdate".  About a year in the making?  But like what usually happens when it comes to human adults organizing coffee-dates or let's-catch-up-dates, this one happened when it was quite unplanned.

What was unexpected too, was the aloofness of both parties toward each other.  At least, that was how it was relayed to me. Rear-sniffing here and there, some circling, and that was it.  I was probably being silly, half-expecting a reaction like those in the cartoons when they would see another one of their species for the first time. 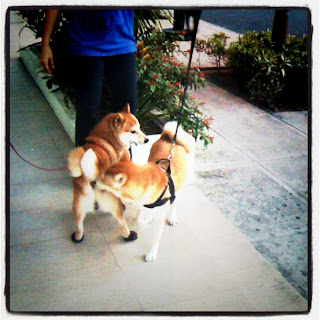 But for now, it's good...no scream...no growl... Let's see what happens tomorrow.  Mya has been kind of the "life of the party", always taunting other dogs to play, while from an outsider's point of view, Samu is of the reserved character, at least in the beginning.  Like a traditional dignified Japanese man.  Then Mya would be a... geisha?  Let's see if this girl can bring out the playfulness in the serious pal.
Posted by Crazy-Nunu at 11:54 AM 4 comments:

A much needed surprise upgrade! A kind soul took pity on the impoverished look of Mya's old lamp-shade collar and gave her a new one which fit her perfectly. No need for home-made extensions anymore.  Good bye to daily masking tape re-touches! Yes, I can sleep better now as Mya will not wake me up in the middle of the night anymore with her shiba shake sound aggravated by e-collar extensions flapping. Dr. Leo is curing the canine hot spots gone not so wild, as well as the humans' sleep deprivation.  Check out the before and after shots.

Unrelated to the topic...Here's a simple pre-walk photo. Enjoying the lowered sofa- no legs for now while renovation is on-going. 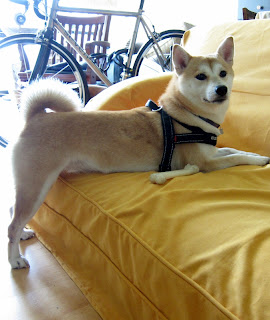